Christopher Nolan aims straight for the gut in this sensational account of the wartime evacuation. 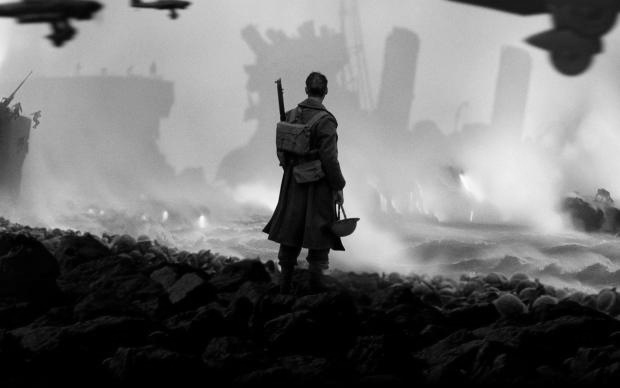 It’s a long time since Christopher Nolan made a ‘small’ film but Dunkirk, despite taking on such a significant historical moment, with a cast of thousands, on gigantic IMAX cameras, manages to capture the intensity and the valour of that bruising wartime event not by recourse to epic scenes of chaos and carnage, a la Saving Private Ryan, but by focusing on the personal experiences of three unrelated individuals.

As well as covering three key elements of the evacuation (land, sea and air) they each represent a war movie archetype. The unflappable, Boy’s Own hero role goes, of course, to the fighter pilot. He’s played by Tom Hardy in another Nolan performance that requires him to keep most of his face covered and mumble more or less unintelligibly. Nevertheless he has a pair of the most expressive eyes in the business, and in the tiniest of glances can convey a powerful combination of bravado, melancholy and grit.

Meanwhile, back in Blighty and heading out in his little rescue boat, is the principled, stiff-upper-lipped older gentleman, unflappable in his determination to play his part and do the decent thing. He’s played by Mark Rylance, the master of the long pause and meaningful look. As you’d expect, his character is the moral centre of the film, a source of sympathy and wisdom in his encounters with a shell-shocked infantryman (Cillian Murphy) and a downed fighter pilot (Jack Lowden).

The film could play without sound at all, with nothing but a few intertitles, and still be as effective

And then there’s the young bewildered private, played by Fionn Whitehead, who is constantly facing up to the troubling moral choices that come with being in such a desperate situation. From the off we see him dodging bullets, the sole survivor of an ambush on the French streets. He soon finds himself on the beach, wordlessly befriending another lost soldier and conspiring, almost telepathically, in ways to reach safety – honestly or otherwise. ‘I’d live with it,’ he replies, when asked at one point whether he’d make a particularly brutal sacrifice to save his own skin, ‘but it’s wrong.’

It’s one of the few times he says anything, and one of the few times dialogue has any major bearing on the plot. This is not a wordy film. In fact, despite the roaring spitfires, gunfire and bomb blasts, the film could play without sound at all, with nothing but a few intertitles, and still be as effective.

Nolan has achieved here what Alfred Hitchcock always admired: pure cinema. Not a frame is wasted. He’s one of the few directors who really knows what to do with the enormous IMAX frame, and it’s a treat to see it used for something other than CGI bombast. So inured are we now to sterile digital photography and cartoony, computerised trickery, that a purist like Nolan can take you by surprise with an artfully composed shot of a spitfire ditching in the middle of the Channel, or the fearful faces of soldiers trapped under enemy gunfire.

Admirable too, is the glossy but restrained photography by Hoyte Van Hoytema. For once, World War Two is taking place in a recognisably European summer. The dogfights are in a sky that’s blue, not the artificially desaturated yellow-grey that’s long been shorthand for the past/wartime. Like a black-and-white photograph that’s been colourised, this really brings home the fact that these events happened to real people in a real place; it lends the action an immediacy missing from most modern war films, which so often instead resort to blood and guts for the same effect. (Rated 12A, the film is notably free of the red stuff, but is immensely more thrilling than say, the gloomily blood-soaked Fury).

The usual iconoclasts have complained that the film’s intensity comes at the expense of emotional engagement. Certainly, the young soldiers are difficult to tell apart (and when they are it is often in the unconvincing shape of Harry Styles and his suspiciously modern hairstyle) so it’s difficult to keep up with who’s alive and who’s dead. This you might forgive as being a fair representation of how it is on the battlefield, although the more famous faces amongst the minor cast, like Murphy and Kenneth Branagh (as the navy commander), might wonder what they’re doing in such underwritten roles when unknowns could have been just as effective.

A non-linear structure also brings with it a sense of confusion that might not be entirely deliberate. Sometimes, as the frenetic action cuts between the three protagonists, it’s not always clear whether what’s happening onscreen is supposed to be contemporary action or a flashback. Title cards at the beginning of the film indicate the time-span each thread covers (land: one week, sea: one day; air: one hour) but it might have been useful to include reminders as to where and when we are in the action.

These though, are the quibbles of the beard-strokers; Nolan set out to capture as accurately as possible the experience of being trapped in Dunkirk in 1941 and in that he has succeeded entirely. The film is a technical marvel. The sound design alone is incredible: spitfires roar; rifles explode with heart-stopping violence. Hans Zimmer provides his usual anti-score, underpinning the tension with a brooding brown-note that lingers somewhere just below the ordinary human register. As for emotional impact, you’d need a wooden heart to not be stirred as Elgar’s Nimrod accompanies the hundreds of little boats appearing on the horizon.

Intriguingly, this most famous aspect of the rescue is quickly glossed over, and when the soldiers finally return to safety, Nolan sees fit to end on an ambivalent but historically accurate note. The troops are shell-shocked, worn out and ashamed; the war was almost lost. Churchill’s famous ‘fight-them on the beaches’ speech is returned to its proper context, that ‘wars are not won by evacuations’, and it is delivered not in the rousing tones of the man himself but by a fatigued soldier reading from a newspaper. It’s an agreeably non-Jingoistic choice from Nolan; he leaves it to us, from the perspective of 70-odd years of peace in Europe, to fully appreciate the sacrifices the people involved would continue to make.

‘Well done’, says a well-wisher to the returning troops.

‘Well done for what?’ says a soldier. ‘All we did was survive.’