The Profound and Sometimes Malevolent Influence of Stopped Clocks in the Movies: 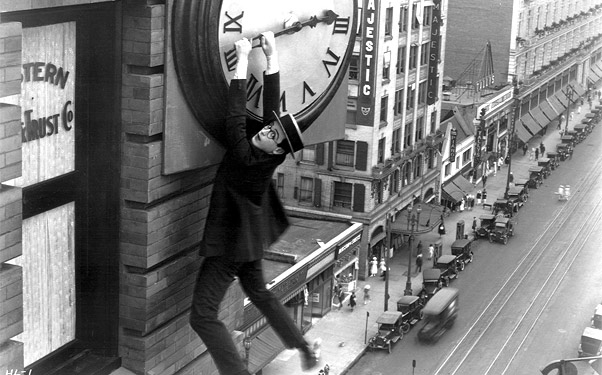 The clock, it might be said, is the original supporting artist. They pepper the movie landscape like stars, although their presence is often overlooked as they stand, indifferent, while the more exciting action unfolds around them. Such is their ubiquity that in 2010 conceptual artist Christian Marclay was able to use snippets from thousands of films to create a fully operational clock as a 24-hour installation. This was their moment in the sun, but when it comes to the mainstream, it’s their sickly, injured comrades that get the juiciest parts; rare is the broken clock that doesn’t have a major bearing on any drama in which it features.

Sometimes their role is no better than to act as a suitably romantic macguffin, though romantic might not be exactly the right word when it comes to Butch Coolidge’s beloved gold watch in Pulp Fiction, bequeathed to him by an avuncular military man who claims to have kept the item hidden up his own arse during imprisonment in a PoW camp. On its own this is a remarkable story, but this unsanitary yet (in any other circumstances) innocuous item will also in due course lead Butch into a gruesome world of murder and mayhem. Admittedly, it becomes clear that he wears this heirloom as a wristwatch, and therefore that it is presumably in good working order. However, when it first enters the story its status as a stopped clock is guaranteed by the surely valid assumption that during its time in hiding it was not wound regularly.

A far more tasteful example of the stopped-clock-as-macguffin can be found in the Back to the Future series, particularly Part One, when the very moment in 1955 that the clock on Hill Valley Courthouse is stopped due to a freak lighting strike becomes integral to Marty McFly’s method of returning to the present. Not only this, but throughout the series a running gag relates to Marty’s unreliable watch, which he is frequently seen putting to his ear to check that it’s still ticking. It might be that Marty’s flitting between eras has affected it at a metaphysical level, and that the relationship between clocks and time is deeper than that of a mere tool for measurement.

Certainly there are examples of clocks capable of bringing time to a complete halt whenever they are stopped. In the children’s TV series Bernard’s Watch, a boy is given a pocket-watch capable of freezing everything around him, though as something of a goody-two-shoes he seems perversely disinclined to use this power for evil. The conceit reappears in Clockstoppers, where the phenomenon is attributed to ‘hypertime’: the watch causing its wearer to move so fast that everything only appears to have come to a stop; a silly concept that Bernard would rightly baulk at.

On a grander scale, the clock that graces the skyscraper in The Hudsucker Proxy is brought to a juddering halt by a broom handle jammed in the mechanism, and the resultant hiatus in time prevents hapless schlub Norville Barnes from hitting the ground after a suicidal leap from his office window. This in turn provides the opportunity for his erstwhile employer to arrive in the form of a guardian angel, and reveals a further dimension to the significance of the stopped clock; that they can act as an agent of fate. This is further demonstrated in the Will Ferrell comedy Stranger than Fiction, when an unreliable wristwatch first appears to doom its owner, only to sacrifice itself to save him from dying in a road accident.

However, more often than not, a malfunctioning clock is a sure sign that something bad is about to happen. There are few things much worse than a violent alien invasion, and in perhaps the most famous scene from War of the Worlds, the first clue that one is just round the corner comes when the local townspeople’s  watches freeze. In the horror-comedy Gremlins, Billy Peltzer is fooled into breaking the cardinal rule of mogwai care – don’t feed them after midnight – by checking the time on a clock that has been vandalised by the mischievous furry creatures, a mistake that will lead his home town to be overrun by rampaging monsters.

Could it be that their tendency to malfunction at the least suitable moment is a passive aggressive act?

Could it be that their tendency to malfunction at the least suitable moment is a passive aggressive act? It might be that the clock, usually the symbol of rigid conformity, precision and functionality, desires to see mayhem unfold around it, and will cease working at the earliest opportunity. After all, for a clock, not telling the time is the ultimate act of rebellion.

If so, the most likely motive for this is revenge; spare a thought for those clocks broken onscreen. One of the most famous images from silent cinema is Harold Lloyd hanging from the bent arm of a department store clock, its face hanging precariously by its internal mechanism. In the ninety years that image has existed in the public consciousness, audience sympathies have lied exclusively with Lloyd’s hapless clerk. Nobody ever spares a thought for the clock, and it’s one of cinemas most overlooked loose-ends as to whether it even gets fixed. Whenever a stopped clock acts as a portent of doom, even by merely flashing midnight after a sinister power cut, it must inevitably think back on the mistreatment of its famous silent ancestor.

After all, the life of a timepiece is clearly a thankless one, and no human could possibly bear it. In Disney’s Beauty and the Beast, head butler Cogsworth manages to stop being a clock upon the lifting of a curse, and his relief is palpable. On the one hand, that this comes as a sort of reward might be seen as a sad reflection of society’s disdain for the travails of these objects. Yet on the other hand, perhaps the message is that good things come to those who put the time in, even if that time is wrong 23 hours & 58 minutes of every day.

This feature first appeared in issue 10 of New Empress magazine.