A tribute to every writer’s best friend first published in The Guardian to mark the closure of UK’s last manufacturer of typewriters:

For this reason alone, we must lament the news that Brother has manufactured its last typewriter in the UK. Even though most of us will have thrown out our old Olivettis or Remingtons a long time ago, there was still much sighing in the Twittersphere at their passing, with the notable exception of Alan Sugar, who was quick to take credit for their demise, a mere 25 years after the final green-screen Amstrad computer flickered its last:

Well, Sugar is wrong, and here are a few reasons why he should join the rest of us and mourn the typewriter’s demise.

Typewriters may not have a handy spell-check tool or broadband internet capabilities, but they do focus the mind. NaNoWriMo novelists should take note: if you really want to write 50,000 words this month, learn from the monkeys and go analogue. The typewritten word is permanent (at least in the absence of Tippex), so you need to think carefully before putting anything on paper, and afterwards have no choice but to move on.

It may be that the authors of yesteryear appreciated this fact when they wrote some of the great works of the 20th century. But then again, they had no alternative. Perhaps, given the opportunity, Dorothy Parker would have signed a sponsorship deal with Apple Mac. Nevertheless, typewriters have managed to fashion a place for themselves at the heart of western culture over the past century, as Bette Davis can testify: 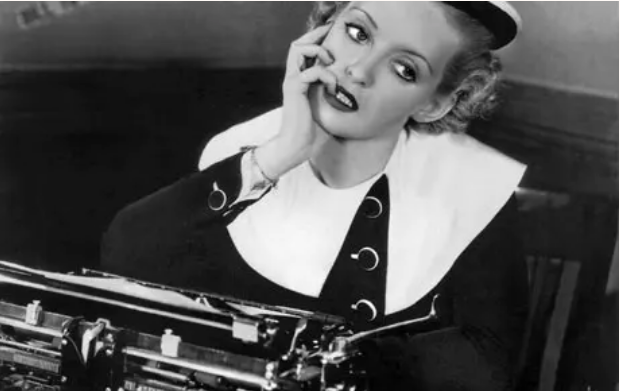 These days, typewriters are mainly fetishised by that brand of hipster who also buys all of their music on vinyl and thinks that the Amazon Kindle is the work of the devil himself. For the hipster, a typewriter stands alongside records and tortoise-shell glasses as a technological high point, when machinery still had soul, and aesthetics were regarded as highly as function. Sure, for the most part they might be annoying poseurs in tweed outfits, but in this case they’re absolutely right. Even this chap. They may be kitsch now, but a typewriter has been captured in the company of some of the most significant and iconic individuals of the last century. Just look at John F Kennedy pictured as a youngster with a mammoth writing machine, or legendary author William S Burroughs busy at work:

It didn’t stop here. The Beatles posed with a suitably cute model in this long-forgotten photoshoot. George looks especially taken with it, but I understand Eric Clapton charmed it away from him a few years later. Even Her Majesty the Queen has had the honour of being immortalised in type, by specialist “typewriter artist” Keira Rathbone. It may well be jubilee year, but honours don’t get much higher than that, ma’am.

Of course, typewriters tend to be most popular among those with an actual use for them, particularly authors. Modern-day titans such as Will Self and Cormac McCarthy still compose their novels using this old technology, though it’s unlikely they take their frustrations out on them in quite the same way as Hunter S Thompson, who was famously caught emptying a few rounds into a misbehaving IBM Selectric. Here he is, looking more studious:

The typewriter’s talents also extend into classical music, as demonstrated by this frankly amazing clip, below, of Leroy Anderson’s The Typewriter, in which an old home portable takes centre stage. Tikka tikka tikka Bing! It may not have much of a melodic range but, oh my, if that tune isn’t catchy. What’s more, at the end of every performance the typist has got himself a saleable script for Hollyoaks.

It has to be said, however, that these humble machines do have a sinister side. What malevolent spirit has engulfed Jack Torrance’s machine in The Shining? The reveal that he’s spent his time relentlessly typing out the same phrase is one of the most chilling in cinema. Yet it’s also very much of its time: these days he could polish off such a manuscript in about half an hour. Simple copy-and-paste job, that.

This brings us bang up to date. Let’s give a shout out to the recently released movie Ruby Sparks, in which author Calvin, played by Paul Dano, magically conjures up his manic pixie girl character to life thanks to what looks like a 1960s Olympia (he can’t be that much of a writer if he isn’t even able to make his invented girlfriend love him, proof itself that even the most magical tools can’t make up for talent). 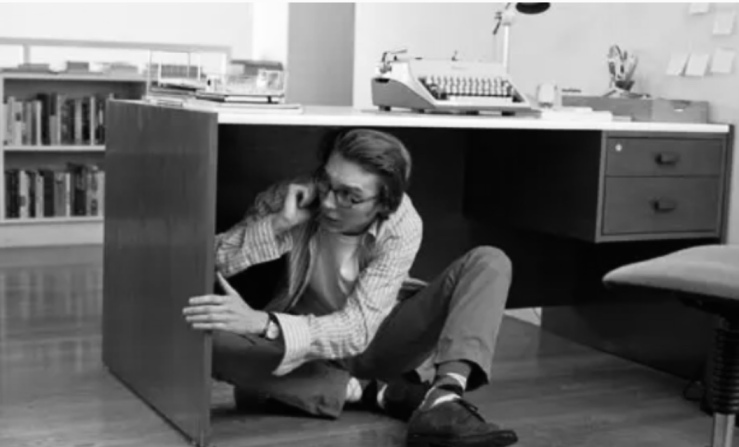 To paraphrase Mark Twain, the first author to ever submit a typewritten manuscript, I think that reports of the typewriter’s demise have been greatly exaggerated. As they continue into their dotage, we owe them a debt of thanks. They might not be all that necessary to us now, but we’d never have got here without them.