The Sixties sink into the abyss in Scorsese’s seminal concert film: 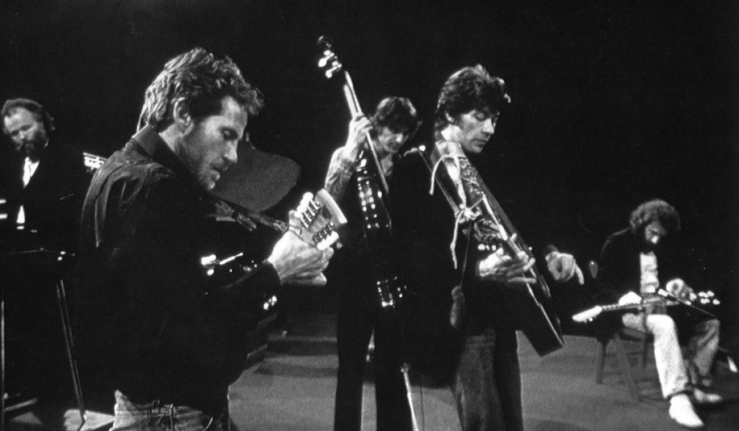 It’s a common refrain of the serial gig-goer, particularly among those who were around in the 1960s and 70s: ‘you had to be there, maaaaan.’ Although probably nothing could match the experience of having a ticket to the Band’s legendary farewell concert on Thanksgiving Day 1976, with The Last Waltz, Martin Scorsese did at least manage to capture something of its spirit.

The Band were always better at earning respect than big audiences. Their virtuoso musicianship elevated countless albums and performances by artists who would inevitably rocket into the A-list leaving them, by 1976, frazzled and frail from sixteen hard years on the road and ready to call it a night.

However, there was still time for one big blow out: an hours-long extravaganza, with full turkey dinner, poetry recitals and orchestral interlude that they would stage in one of their favourite fleapits. All of their megastar pals would show up too, eager to pay their dues. It would be a ‘celebration of rock’n’roll,’ according to guitarist Robbie Robertson, but it might just as accurately have been called an epitaph.

Naturally, it was thought a wise idea to keep a record of such an event. It’s rare even in today’s world of multi-act, three-day festivals to see such luminaries as Bob Dylan, Van Morrison, Neil Young, Eric Clapton and Joni Mitchell (among many others) all in the same place at the same time. At first there were only vague thoughts towards capturing it for posterity on cheap 16mm film, but Scorsese knew better. He saw the potential for a real work of cinema, one that would benefit from the Hollywood-honed skills of production designer Boris Levin and cinematographer Michael Chapman. The Last Waltz may or may not be the best concert ever captured on celluloid, but it is unarguably the most beautiful.

It would be a ‘celebration of rock’n’roll,’ according to guitarist Robbie Robertson, but it might just as accurately have been called an epitaph.

Scorsese really deserves credit for establishing the grammar of concert movies as we know them today. Many of his innovations, particularly ignoring the audience, crop up in later famous examples of the genre, (particularly the similarly iconic Talking Heads picture, Stop Making Sense).

The music, as you would expect, is first class. It’s quite the all-star line-up when the likes of Ringo Starr and Ronnie Wood are relegated to blink-and-you’ll miss them cameos.

Bob Dylan keeps everybody on edge with typically idiosyncratic takes on Forever Young and Baby Let Me Follow You Down – and, for once, looks like he’s genuinely enjoying himself. Van Morrison, too, puts in a particularly memorable performance of Caravan, high-kicking his way through what was apparently severe stage fright. Meanwhile Neil Young shambles onstage for a heart-stopping performance of Helpless as Joni Mitchell, bathed in blue light, provides ethereal backing vocals.

It’s also fascinating to see rock’n’roll stalwarts like Muddy Waters and the Staples Sisters, still very much at it in 1976, casually upstaging the scruffy and dissolute upstarts like Young and Eric Clapton. Ronnie Hawkins almost dances away with the whole concert during a madcap performance of Bo Diddley’s Who Do You Love.

The Last Waltz provides a window into an era long since disappeared… one of  languid dudes who seemed to only come alive in the spotlight, even as it was slowly destroying them.

It’s interesting to contrast these easy going performances with those of the Band themselves. Throughout, the supposed celebratory atmosphere seems a bit desperate. This is particularly evident during the occasional interview segments: all of them seem well and truly burnt-out. Richard Manuel peers from behind his beard malevolently as he recalls all of the women he’s encountered on the road. Rick Danko seems barely able to speak during a tour of their ironically titled Shangri-La studio. Every one of them is afflicted with a 1,000-yard stare that can’t entirely be down to the massive substance abuse that was allegedly taking place behind the scenes.  When Robertson claims that he finds the concept of carrying on for even another four years as unthinkable, you can believe him.

Perhaps what they recognised was that their old-school brand of music, that country-inflected, down-home rock’n’roll that had dominated the 50s, 60s and 70s, was already in decline. Today, with it well and truly dead, The Last Waltz provides a window into an era long since disappeared, not just of the flared trousers and huge-bonnetted cars that can be glimpsed in the opening title sequence, but of that particular brand of elegantly wasted rock-star; languid dudes who seemed to only come alive in the spotlight, even as it was slowly destroying them.

This 40th anniversary re-release is apparently the first time the film has been made available on Blu-Ray in the UK, and it looks and sounds as marvellous as you’d expect on that format, although all of the special features – including two insightful commentaries from the film-maker and the surviving band members – are recycled from previous versions.

What fans will really be coming for is the wrapping, and the always reliable Masters of Cinema imprint have prepared a handsome hardbound case, complete with a newly compiled 100-page booklet that’s crammed with rare photographs and archive material.